Wellshire Farms is trying to kill me.

No, this is not a paranoid rant; some of the largest merchants of ready-to-eat foods are selling food that is deadly to millions of Americans.

The Sun-Sentinel is carrying a Chicago Tribune story that reports some major American food vendors are selling products that are supposed to be free of allergens, but aren't. The consequences of that can be - and have been - fatal.

One of the companies out to kill people recklessly lax in their labeling is Wellshire Farms. There are actually lot more in the Tribune story, but I've actually bought Wellshire Farms products, and failed to connect my resultant reaction eating their product because, after all, it was clearly labeled "gluten-free."

Pridemore recalled how she bought Wellshire Kids' dinosaur-shaped chicken nuggets, made by New Jersey-based Wellshire Farms, because the item specifically claimed to be gluten free. She also found the same claim on the Wellshire Farms Web site. 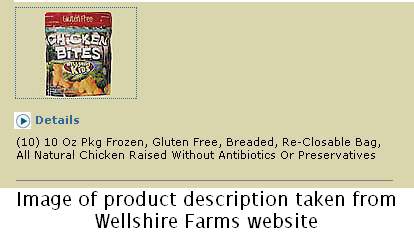 After her son had the severe reaction to the nuggets, she took some to his allergist, who ran tests, including gently rubbing a nugget on the boy's arm to see if it would cause a small welt. It did, and the allergist concluded the nuggets were to blame for his full-blown reaction.

...she sent the remainder of the nuggets in her freezer to the Nebraska lab.

Like any of us, she contacted the USDA. But it turns out that they're out to kill indifferent to the plight of those of us with allergies, too,.

she e-mailed a copy of the findings to the USDA and reminded Maxwell that the product advertises itself as gluten free.


The investigator wrote back that the government had "archived your complaint." The investigation went no further, according to Pridemore. She also e-mailed the test results to Wellshire Farms. The company, she said, never responded.

You might be wondering why Pridemore had the product tested herself: well, she was told to:

In an e-mail in January, (agency investigator Michael) Maxwell indicated to Pridemore that in light of that inspection report and the fact that no other consumer had complained, no action would be taken. "You may want to have the product tested," he wrote, according to a copy of the e-mail exchange.

And did the USDA then contact the company to have them explain the test results?

USDA spokeswoman Amanda Eamich said one reason it did not ask Wellshire Farms to recall the chicken bites is because the agency did not trust the consumers' testing results.

So, the USDA instructs the victims to seek their own test results, and then ignores them out of hand. That sounds like complicit negligence, to me.

To be fair, it's possible that Pridemore's sample was contaminated after it was open in her kitchen. I know that it couldn't happen in MY kitchen, because, as a celiac, I don't keep any gluten-bearing items in the house. That would be pretty stupid, wouldn't it? I mean, the stuff's like arsenic to me, why would I keep it around? But that's me, and I don't know about Pridemore's kitchen.

Luckily for us, the Tribune, being a responsible journal, was similarly willing to believe that maybe Pridemore's sample was contaminated.

The Tribune recently bought two samples of the chicken nuggets and sent them to the same Nebraska lab. Both tested positive for gluten--including a sample from an unopened box.

The nuggets, said Steve Taylor, the lab's director and a leading allergy expert, "are not safe for people with wheat allergies or celiac disease," often characterized by chronic abdominal pain.

I guess Pridemore isn't stupid, either. Wish we could say the same for the USDA.

The Tribune found that two other "gluten-free" Wellshire products with high amounts of gluten in them. They informed the company of their results:

Wellshire Farms owner Louis Colameco said his products are safe. But he said that in light of the two consumer complaints and recent moves by regulators to tighten "gluten-free" rules, he halted production of the three Wellshire Kids' products in June.

He said he has not recalled the Wellshire Kids products still on store shelves because he believes they are in compliance with federal regulations.

So, even though you know that the products are labeled gluten-free when they are clearly not, even though you have several complaints of children winding up in the emergency room, this murderous clod you think it's OK to leave the products out and available for other children to be sent into anaphylaxis after eating the falsely labeled products. Thanks, Louis. Club any kittens to death recently?

Maybe, Mr.Colameco, you did not knowingly - or even actually - violate the letter of the law. But you've violently gang-raped the hell out of the spirit of it, haven't you? The intent of the law is clear; to help people with severe food allergies find foods that are safe to eat. Your products are NOT safe for people with severe allergies to eat. It should be obvious to any decent human being that these products should be pulled immediately before some other small child bites into his dinner and suddenly finds his esophagus clamping shut and his blood pressure plummets so fast that he can't even call for help as he suffocates in front of his loved ones.

You're a real prince, Louis.