This Just In - Fidel Castro Is Still Not Dead

The Miami Herald reports that the latest rumors about Fidel Castro are actually part of an attempt to infect computers.


According to Naked Security, the original message emerged early August as an email message with the subject “Fidel Castro is dead,” followed by a picture of him in a casket. Naked Security determined that the message about Castro was fake and linked it to programs designed to disrupt computer systems.

And while some folks can be lauded for trying to get an insider's view, Cuba's most famous blogger had this to say:


“My phone hasn’t stopped ringing. Everybody is asking me if it’s true that Fidel Castro is very sick,” was part of the message (Yoani) Sánchez wrote on her Twitter account around 3 p.m. Tuesday. “I DON’T KNOW, and if it were true, we Cubans would be the last ones to find out.”

So don't open any attachments to a "Fidel Is Dead" message, and don't forward it, because he's still not dead.  Although I suspect he'd be pleased at the attempt to disrupt our Imperialistic social networking capabilities.
No comments:

The Palm Beach Post reports the man in charge of Florida's prison system, Edwin G. Buss, has resigned after six months on the job.  Which is not surprising, seeing as how Governor Rick Scott has been undermining his authority all along.

"Regarding Buss, Governor Scott said differences in philosophy and management styles arose which made the separation in the best interests of the state," Scott's office said in a statement.

The thing to keep in mind here is that Buss has a background in running prison systems while the governor has a background in bilking MediCare.  Of course there are differences in philosophy; Mr. Buss has been praised as being one of the nation's top prison administrators, while Mr. Scott managed to avoid prosecution for one of the largest acts of fraud in US history.

It was a crowning achievement for Scott's administration to lure him away from his post in Indiana, where he had a reputation for effective reform and cutting costs.

Who would you rather have running our prisons - a man lauded as being top in the field, or someone who'd be serving time if not for the work of his shysters?

In the past 10 days, Scott's administration twice publicly accused Buss of initiating contracts and requests for proposals without getting prior approval from Scott's office.

Which in reality world, we'd call "doing his job."  He was hired for his expertise; expertise not found in the governor's office.  The question this raises is "why is the governor interfering with the daily operations of the prison system?"

The governor has no background in prisons.  He's never run one, never dealt with one, never served time in one (unfortunately).  His background, theoretically, is medical law. And of course, we know of at least one job he completely fucked up.  He narrowly avoided criminal charges, but was involved in the lawsuit that followed.  Since he barely understood the field in which he was presumably an expert, you'd think he'd stay out of a field in which he was completely ignorant.

And yet Mr. Scott had no problem voiding contracts that Mr. Buss had signed in good faith.

During the lawsuit that followed Scott's gross mis-management of HCA, which wound up paying a whopping $1.2 billion dollar fine for acts fraud committed while Scott ran the company, Scott denied knowing even the most basic terms relevant to running a hospital.

Now, if you've ever worked in a hospital, you'd know that "occupancy" is the term used most often in business discussions about a hospital; it's the number of people in your hospital's beds.  Occupancy to a hospital is like ticket sales to a movie; it's the life's blood of the industry.  You can't get through the day without being aware of your hospital's average occupancy.

Unless, apparently, you're Rick Scott.

So, Rick Scott didn't even know the most basic terms of an industry he was actively working in, and now he's all pissy because an expert in a completely different field didn't consult him about operations in a field in which he admittedly has no background?

A good governor attracts the best talent, and then stays out of their way.  Yes, he should be informed, but only informed, not mired in every single decision best made by experts.

One thing is clear; the wrong person resigned.
No comments:

Hemorhoids Get a Bum Rap

Last month, you may recall that The Orlando Sentinel declared that only hemorrhoids are more unpopular than Florida Governor Rick Scott:


The first-time governor — less than a year into his term, typically a honeymoon period for newly electeds — now has an approval rating of 27 percent.

That makes him one of the least popular politicians in the United States and only slightly more popular than a hemorrhoid.

I though that this might be a bit of hyperbole.  So I polled my readers to see if there was any truth to this at all.  After all, I'm always going on about how important it is to be honest, to report the facts, and to avoid pointless rhetoric.  Time to practice what I preach.

And of course, there isn't any truth to it at all. 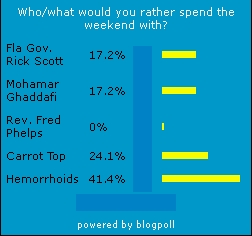 As you can see here, hemorrhoids are actually more than twice as popular as Governor Rick Scott, or Libya's ruthless dictator, Mohamar Ghadafi.

People would rather have hemorrhoids than Carrot Top, but Carrot Top is preferred over the company of either Ghadafi or Scott. 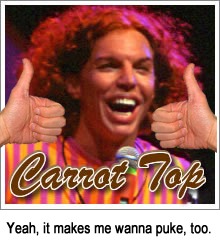 This makes perfect sense: in choosing between painful rectal itching and the comedy stylings of Carrot Top, one must factor in the fact that there's a cream for hemorrhoids.

In fact, it turns out that only Rev. Fred Phelps, bigot-in-chief of the hate group Westboro Baptist Church is less popular than Florida Governor Rick Scott. 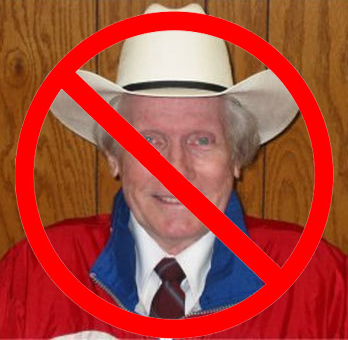 So I'm afraid we have to label Scott Maxwell's claim that "Rick Scott is only slightly more popular than hemorrhoids" as false.
No comments:

Email ThisBlogThis!Share to TwitterShare to FacebookShare to Pinterest
Links to this post Labels: govenrment, hell in a handbasket, politics

I am not making this up:
Shark Found in Woods of Milton NH