"Dear Lord, I've been asked, nay commanded, to thank Thee for the turkey before us. A turkey, which was no doubt a lively, intelligent bird. A social being, capable of actual affection. . . nuzzling its young with almost human-like compassion. Anyway, it's dead and we're gonna eat it. Please give our respects to its family." 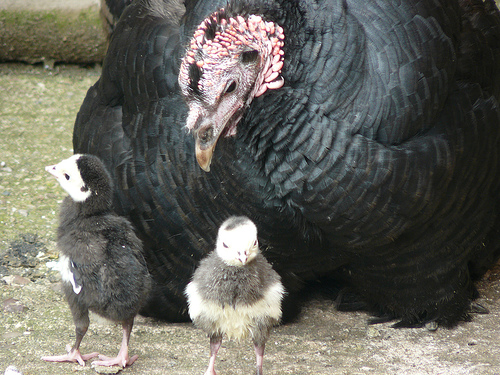 It's been four months since the Sun-Sentinel re-vamped its website. While an overhaul was desperately needed, the initial response was largely negative. Website navigation was haphazard, and the layout of the sections made little sense: it was like the newspaper had hired a webmaster who had never seen a newspaper. Worse, a lot of the content was old: new content somehow evaporated with the new layout.

So, have they fixed it?

It seems like they still haven't grasped very basic concepts necessary to the basic production of a news source. Like the definintion of "news." Or the difference between sports and arts. Or that the Florida Keys are not in Broward County.

Let's take a peak at the Culture section. The good news is that they dropped the stupid title they initially chose for the page: "Going Out." And that's it for the good news.

Here's the top half of the page for November 10: 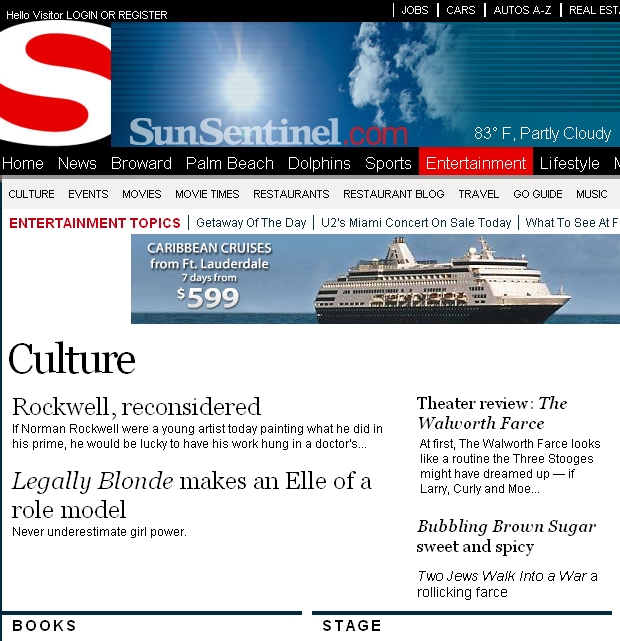 Initially, it doesn't look too bad. Wait, let me fix something for you:

Yeah, they recycled the Legally Blonde story from March, when it played at the Kravis Center. Isn't news supposed to be, well, NEW?

So Four out of the five stories are current. Oh, didn't you notice? There are FIVE stories, not four. Take a closer look at the right hand column. I know that it looks like it's a title, followed by a lead-in, and then another title followed by another lead-in, but it's not. 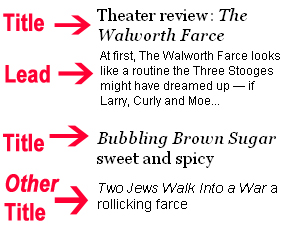 It's the kind of sloppy layout that would embarrass a high school newspaper in Podunk, but it's what passes for "style" at the stinking corpse of what was once a mediocre metropolitan newspaper.

So, four out of the five stories are... wait a minute... I almost forgot: 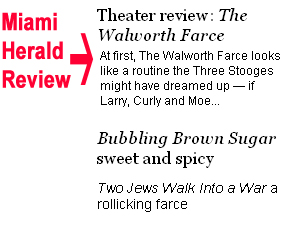 So, it turns out the Sun Sentinel is leading its Culture section with five four three current Sun Sentinel articles.

On the other hand, the Sun-Sentinel IS the only regional news outlet reviewing shows at the Broward Stage Door Theatre. They do deserve credit for that. Kudos to Special Correspondent Bill Hirschman, who makes that effort to cover them.

Do we dare peak below the fold? We do. 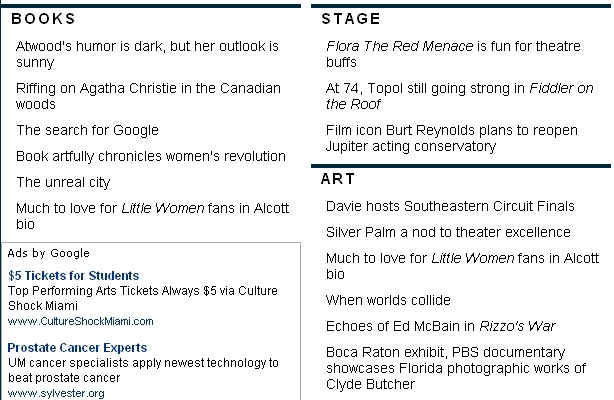 Shockingly, most of the articles in the BOOKS section are less than a week old, with only two dating to November 1. Not bad. How many were written by Sun-Sentinel writers? Only one.

Did they do any better in the STAGE section? Of course not! 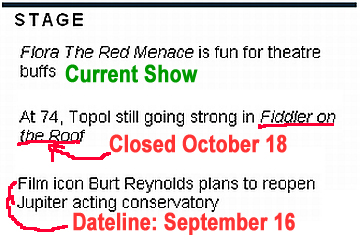 So, one third of the STAGE section is old, stale stuff. LOCAL stuff, but STALE stuff.

Another sad fact: they dropped some current theatre reviews to hold on to a month old review and a two month old "breaking news" article. And they knocked out more current stories from the top to regurgitate the March article about Legally Blonde.

But that's not the worst of it! The ART section is so unbelievably bad, it's impossible to conclude that the Sun-Sentinel is paying anyone to oversee the page! 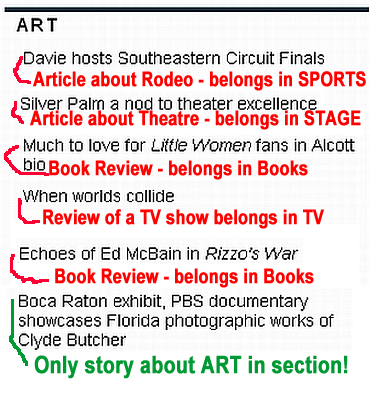 Maybe I'm missing something with the Rodeo story; let's take a peak at it:

Nope. Sounds like a sport to me. Only a drooling idiot would stick this story in the ART section. An ART section with only one ART story. And worse,that one art story is over a month old. It was news back in September.
No, the Sun-Sentinel still lacks competent editors and a strong guiding hand.
4 comments: