Because the rain don't last

How To Stop Receiving Negative Feedback

The Palm Beach Post recently flushed a butt load of money down the toilet in the form of PB Pulse, a slick new interface to replace its Entertainment section with something reminiscent of People Magazine, only without any sense or reason to it.

There's the senselessness of the layout itself, the lack of interesting content, and the way it overloads your web browser so the pages render in fits and starts. Check out the basic page: 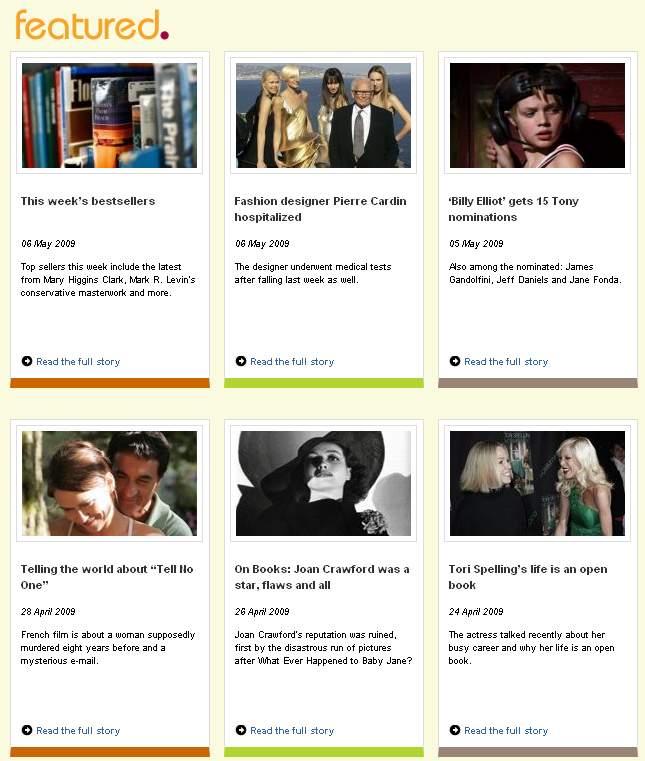 The colors don't seem to mean anything. The stories change at random. There's no rational mind at work here. Whic box is the theatre story? The music review? Restaurant commentary? It could be any of them. It's probably none of them. Why? Because instead of reporting about the town we live in, some brain-dead drooling mouth-breather decided we need to have more stories about Tori Spelling, and Slate Videos. Like we don't already go to Slate to watch them. 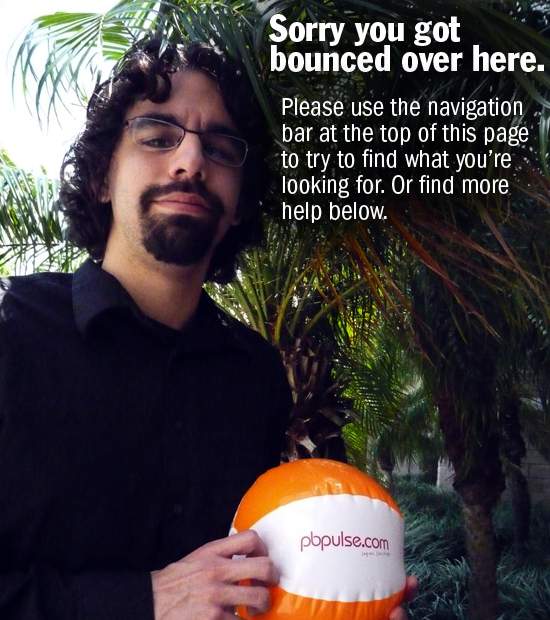 They also broke their site map, so that attempts to reach anything having to do with entertainment or lifestyle leads you to a photo of some smug asshole leering at you:

"F*** you, we threw out the page that had all the information you wanted, the one you thoughtfully bookmarked so you could always go right directly to it, and replaced it with something that loads painfully slow. But I got this cute toy with the logo of our hideous new website! HA HA!"

So how did they put an end to all the negative feed back? I'll show you how. 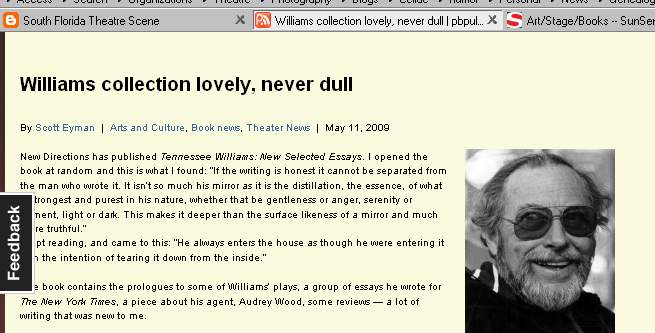 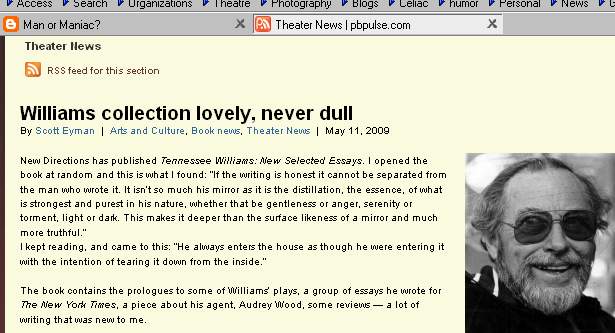 That's right. They simply took away the link to the feedback page. Brilliant!

I'm sure that somewhere, some toady web hack is garnering praise:

"Yesterday, we were inundated with complaints: but Jones here is a genius! We haven't received a single complaint since Jones installed that last patch! Now we can put on our rose-colored glasses and know that our jobs are secure!"

Of course, it did solve one actual problem: the way that stupid tab blocked a significant portion of the text.

But never fear! If you still want to give the "web designers" at PB Pulse a good chewing out, you can still do it; simply click HERE. Oh, the feedback page is even worse than PB Pulse; a land of forced good cheer. The whole thing has been given a relentlessly Happy Spin. You can Ask a question, or Share an Idea, Report a Problem, or Give Praise.

But you can't Complain.

Email ThisBlogThis!Share to TwitterShare to FacebookShare to Pinterest
Links to this post Labels: hell in a handbasket, nitpick-a-rama

I should start by declaring that I am not now, nor have I ever been a member of the Catholic Church. I don't proscribe to any organized religion, as my personal definition of religion is that it is the belief in someone else's divine realizations.

But one of the things I do believe in is truth and honesty. There are facts in this world, and no legitimate purpose is served by ignoring those facts. If one has to lie to bolster their faith, then it is not a faith worth holding.

Father Alberto Cutié's involvement with a woman has got people all up at arms: on the one side, his supporters who argue that celibacy is passé in the 21st Century, and on the other, the Catholic traditionalists who maintain that Father Cutié has violated some kind of sacred commandment.

But the reality is that celibacy has nothing to do with God or Jesus Christ, and was not included in the founding of the Church. Here's one version of what the Bible has to say on the matter:

1 This is a true saying, if a man desire the office of a bishop, he desireth a good work.

2 A bishop then must be blameless, the husband of one wife, vigilant, sober, of good behaviour, given to hospitality, apt to teach;

3 Not given to wine, no striker, not greedy of filthy lucre; but patient, not a brawler, not covetous;

4 One that ruleth well his own house, having his children in subjection with all gravity;

5 (For if a man know not how to rule his own house, how shall he take care of the church of God?)

Obviously, Jesus didn't have issues with the the priesthood from gettin' some. In fact, it seems he assumed that anyone interested in the job would have a family.

So why did the Church start making its initiates take vows of celibacy?

Priests were leaving Church property to their heirs. And you know how big a Catholic family can be...

Basically, there was a scam going on: a priest or Bishop would inform someone with land and means that they might burn in hell for their actions (or inactions). But perhaps they could be absolved if they left their lands to the Church. The Duke or Earl or Baron or whoever would sign over his land in return for Salvation.

A lot of rulers started getting upset about this practice; the Church was getting mighty powerful.

Only it wasn't, really. The bishops were getting powerful, because they were leaving these acquisitions to their heirs. So the families of the Bishops were becoming wealthy and powerful, the heads of State were losing revenues from taxes and knights' fees (as a gift to the church, those lands usually became exempt from taxes), and the Pope was getting a lot of heated complaints and little gold out the arrangements.

In 1018, Pope Benedict began to get serious about the matter when he decreed that descendants of priests could not inherit property. The Second Lateran Council finally made celibacy a law of the Church in 1139. The matter was brought up again in the 16th century, when dissenters tried to return to original Church doctrine, but the Council of Trent finalized the doctrine of celibacy in 1563.

Now, to be fair, the Church had tried to instill celibacy as far back as the Spanish Council of Elvira, back in 305.

We decree that all bishops, priests and deacons in the service of the ministry are entirely forbidden to have conjugal relations with their wives and to beget children; should anyone do so, let him be excluded from the honour of the clergy.

Their argument was that when one dedicated one's life to the church, it required one's full attention. Well, you know what they say about Latin Lovers: the council might have had legitimate grounds for complaints.

But the fact remains that celibacy of the priesthood isn't a decree from God or Jesus Christ, it's the mandate of men, intended to solve the worldly problems of the Church, whether it's priests boning their parishioners to the exclusion of their duties or bishops making generous bequests out of the Church's pockets.

And that's absolutely the Church's right. It's a private institution, they can declare any criteria of admission they wish. Cutié knew the rules when he signed up: he took an oath, and he's broken it. They have the right to read him out of the Church if they like.

BTW, we should refer back to the Bible, for God's instructions to Mankind:

Be fruitful, and multiply, and replenish the earth...
Genesis, 1:28

You may recall the story of Andrea Eichhorn. While responding to a 911 call for a drowning child, she slipped and fell on a puddle of water from the boy. The boy was resuscitated, but suffered severe brain damage, and will spend the rest of his life in a vegetative state. Eichhorn recieved treatment for he injuries, then sued the boy's family.

The outcry from the public was loud, and it was unanimous: string the bitch up!

Against the overwhelming tide of public opinion, Eichhorn did drop her lawsuit. But the damage was done, and she was suspended, then fired from her job with the Cassleberry Police Department.

On April 16, the Orland Sentinel reported that she lost her appeal to be reinstated.

"We regretted the negative community impact this incident created and will continue to strive to build trust and high levels of confidence between our police department and the community it serves,"
-City Manager Barbara Lipscomb

"This might well be the most publicized career suicide in history."
-Me.

Now, if only David Heil, her scumbag lawyer, would be disbarred, justice would be complete.