The Latest Tea Party ''Tempest in a Teapot" 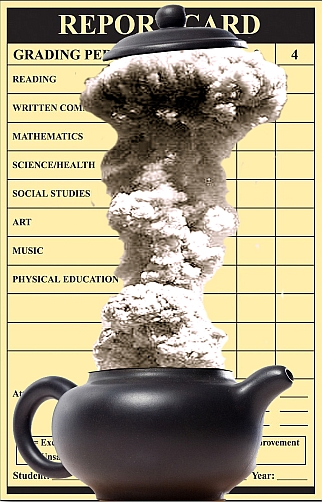 In case you're wondering why they want these records unsealed, it's because people are clamoring for Mitt Romney to release more of his tax returns.  It's making him look bad.  And of course, there's Harry Reid claiming that Romney isn't releasing them because he hasn't actually paid taxes because of the nature of his income, which makes him look worse.

Since Mitt stubbornly won't release the information that would completely prove whether or not he paid taxes, that means the only thing left for his supporters to do is to make Obama look bad for not releasing his.  Which is problematic, because he's released decades of tax returns, and so has his running mate.

Obama has also released more copies of his birth certificate - both long and short - than Romney has released tax returns, so they have to come up with something else point at and accuse him of hiding.

But the fact is that we know a great deal about his performance in college from what is public record.

Here are the salient points we know about Obama's education; he transferred from Occidental to Columbia University, a tremendous step up academically. After his first year at Harvard Law School, he was selected as editor of the Harvard Law Review, a position of great prestige that must be earned through academic excellence and superior writing skills. During his second year at Harvard, he was selected to be President of the Review. There is no question that he was an excellent student; that is the only way he could have gained those positions.

"Demanding" his records isn't a search for the truth, it's just another pathetic attempt to make up a scandal where none exists. It's Birtherism 2.0.