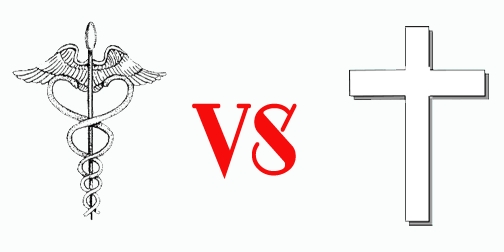 It's bad enough that Representative Todd Akin (R, Missouri) was so poorly educated that he believed that women who are raped can't get pregnant because "everything shuts down" and his defense was "I misspoke" instead of a retraction, an apology, and withdrawal from the congressional race.  Anyone who sits on a committee overseeing Science ought to know some science.

Now we have a choice; we can believe Bryan Fischer, speaking for the American Family Association, when he insists that Akin was right.  Fischer holds degrees in Philosophy and Theology.

Or, we can believe the American Congress of Obstetricians and Gynecologists (ACOG), who call Akin's remarks "medically inaccurate, offensive, and dangerous."  ACOG is the nation’s leading group of physicians providing health care for women.

So here it is, theology versus science.

A doctor of bible studies:


When you have a real, genuine rape, a case of forcible rape, a case of assault rape, where a woman has been violated against her will, through the use of physical force, there’s a very delicate and complex mix of hormones that take place that are released in a woman’s body and if that gets interfered with it may make it impossible for her or difficult in that particular circumstance to conceive a child.


There is absolutely no veracity to the claim that “If it’s a legitimate rape, the female body has ways to shut that whole thing down.” A woman who is raped has no control over ovulation, fertilization, or implantation of a fertilized egg (ie, pregnancy). To suggest otherwise contradicts basic biological truths.

Personally, I have to go with the ACOG and science, because it's based on, you know, reality.

Email ThisBlogThis!Share to TwitterShare to FacebookShare to Pinterest
Labels: election, hell in a handbasket, republicans, right-wingnut