Remember when I pointed out that death occurs in threes, and then discovered that only two spokesmen ( Ed McMahon and Bill Mays) had died? 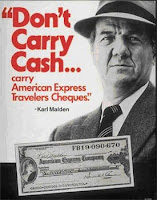 His film credits ...include an Oscar-nominated turn in On the Waterfront, as well as roles in such movies as Birdman of Alcatraz, How the West Was Won, and the 1962 movie adaptation of Gypsy, in which he played Herbie. He earned four Emmy nominations for his leading role in The Streets of San Francisco, and won an Emmy for the miniseries Fatal Vision.

He was also well known to TV viewers for a long-running American Express ad campaign in which he popularized the phrase, "Don't leave home without it."
- TheatreMania.com