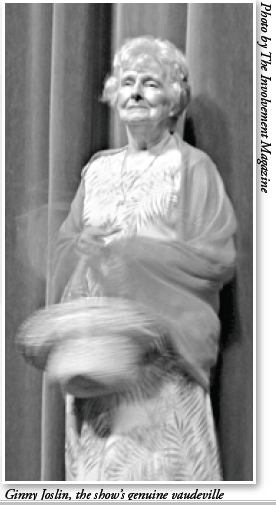 My grandma turned 91 today.  She sounded a little tired on the phone, but she'd spent the day out at my aunt's, surrounded by great-grandchildren.

She's pictured here performing in one of those "senior follies" things they did a couple of years ago.  Only two performers had a background: my grandmother started on Vaudeville at age 2, with my uncle Win: together they were "Winnie and Ginnie, the Tibbitt Twins!  Sweet songs and soft-shoe!"  This was a followup to my great-grandfather's act, "Willy-Nilly Tibbitt, Snappy Dance and Natty Patter."  (No, they were not twins.  Great grandad was big on marketing.)

Uncle Winn never took a shine to it, but my grandmother pursued acting and singing her whole life, although she never quite managed to make a career out of it.  South Florida audiences may remember her turn as Granny in the Actors' Rep production of Going to See the Elephant.

She met my grandfather when he directed her in some lightweight comedy back in 1938.  He was home from college, and a buddy asked him to direct a play at the Haddonfield Plays and Players.  He agreed, on the condition that they find "real knock-out" to play the ingenue.  Enter grandma.

They stayed active with the Plays and Players for years, directing and appearing in shows. My grandmother appeared in or directed shows with Michael Landon, a nice Jewish boy from Collingswood, and Judith Light, from Burlington. Everyone wanted to perform with the Haddonfield Plays and Players in those days.

She was asking me if I had anything to do with casting the shows coming in to my theatre.  When I explained that I did not, she wilted for a second, then said, "Well, if you know of anyone casting an old lady, give me a call!  I've got to get out of Iowa for bit.  I can't get through a conversation without it turning to to football!"

And she'd be great.  At 91, she's as sharp as ever.  She churns out short stories and children's plays for the Sunday school market, which is neither lucrative nor a road to fame, but she likes it.