Rick over at South Florida Daily Blog called it "Stupid Headlines R Us," so I had to see it. 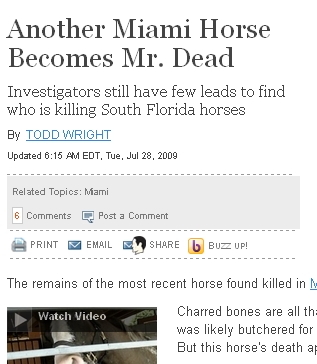 Wow. This is worse than stupid. It's thoughtless. There's nothing remotely funny about this story.

...the animal was probably still alive when chunks of its chest and legs were sliced off by the illegal butchers. Then the horse was lit on fire near its stable.

I don't know who is writing the headlines for NBCMiami; it probably was NOT reporter Todd Wright. But whoever wrote it, they ought to be sent out to help clean up the dead horse. That'll give them perspective on what is and isn't funny.
Shame on NBCMiami for not only coming up with it, but actually using it, and then letting it stay up.

UPDATE:
At some point in the day, they did change the title, but the URL still tells the tale:
nbcmiami.com/news/local-beat/Another-Miami-Horse-Becomes-Mr-Dead.html

Email ThisBlogThis!Share to TwitterShare to FacebookShare to Pinterest
Labels: hell in a handbasket, nitpick-a-rama