Geez, the individual pages look so pretty that I really want to like the new website. But I can't. It's a skin-deep makeover, and as soon as you click some links you discover that the pretty new website is a decaying corpse. I am appalled at the poor quality of this makeover. Just when I think it couldn't possible get worse, it does.

I like opinion and analysis, so in an attempt to give the drooling idiots at Sun-Sentinel a chance, I click on the VIEWS tab, which in most places allows you to set text, color palettes, and so on, but some clueless nitwit thought it would be a cool name for the Opinion section, because Opinion is so, you know, accurate.

And accuracy seems to be just a word at this exciting new Sun-Sentinel.

Let's take a look at the top of the page: 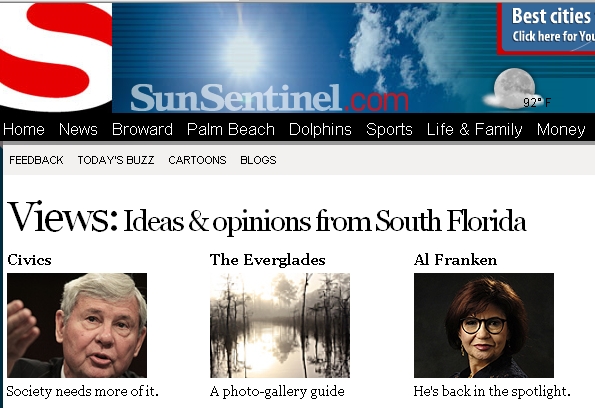 Civics, with a picture of Bob Graham. OK, that works.

The Everglades, a photo gallery guide... which has no place on an Ideas & Opinion page, but makes sense if "Views" is supposed to be a collection of images, which frankly makes more sense than the way they're using it now. But the gallery offers neither ideas nor opinions, and belongs somewhere else.

Al Franken? WTF? Al Franken is not from South Florida. But it's not ABOUT Al Franken, it's BY Al Franken! The article has nothing to do with South Florida. And that picture isn't Al Franken. I have no idea who that person is, and clicking through only deepens the mystery. This is a MASSIVE fail, and we're only at the tippy-top of the page! This doesn't bode well: 2/3 of the content so far is crap.

It's followed by a list of titles. No explanation is given about the nature of these articles, or their origin. But clicking through, you discover that each of the eight titles is an editorial. Several of them are over a week old.

Scrolling down, we get Chan Lowe's blog, presumably so they can double the fist article with a cartoon to emulate the print version. Eh. He offers opinions, I guess it works.

But that's just, you know, something good papers do. Good papers also let you look at yesterday's letters, and even letters from the past 7 days. Not the Sun-Sentinel! You'll see today's pathetic offering, and THAT'S IT! Want stale opinions? Scroll back up to the unlabeled editorials!

Continuing, we find another blog, TALK BACK SOUTH FLORIDA. It lists the titles of a few blog posts. Want to click through to the entire blog? Tough, because the Sentinel isn't interested in allowing you to do THAT.

Next we come upon COMMENTARY. A small selection of titles, but no explanations. Is this more letters? Something else? We don't know. Guess. WRONG! Guess again. WRONG AGAIN! HA HA! WE FOOLED YOUR SORRY ASS!

It's columnists. Each title is by a different syndicated columnist. You can only discover this by clicking on the link, going to the article, and scrolling all the way down to the bottom of the column. In a good paper, you have a page dedicated to just the columnists, and it's laid out so you can see which columns are by which columnists. But in the crass world of the Sun-Sentinel, one columnist is much like another. The Wii-playing interns that make up the web design team don't know the difference, why should you?

And after the cleverly hidden Columnists, we have .... MORE EDITORIALS! They're even clearly labeled as such. Actually, they're called MORE RECENT EDITORIALS. But they are stinky-old. You can't see yesterday's letter to the editor, but you can read last month's stale opinion that has been washed away by the tide of developing events.

I never thought I'd find myself pining for the old Sun-Sentinel website.

Email ThisBlogThis!Share to TwitterShare to FacebookShare to Pinterest
Labels: hell in a handbasket, nitpick-a-rama, Sun-Sentinel