The Sun-Sentinel completely abandons any pretense of having even a modicum of journalistic integrity by setting up the most ludicrous poll of 2008 to accompany a story on former US Rep (and current sleazebag) Mark Foley.

The article itself is a pretty cut and dried story; The FDLE announces that it doesn't have enough evidence to warrant filing charges against Foley.

The crux of the matter is that while Foley may be guilty as sin, they can't prove it.

Last year, the general counsel of the U.S. House of Representatives refused to release Foley's government-issued computers without Foley's permission.

Not surprisingly, Foley, through his lawyer, refused to let them dig into computers paid for with your tax dollars. Would any company in the private sector have gotten away with such an action? Of course not! But when you start dealing with the federal government, especially Congress, justice takes a back seat to saving your ass.

By the way, the article does not address the fact that Foley would not have been protected had he worked in the private sector; that's another lapse, although not as large as the Poll.
This story DOES raise a question that DOES warrant asking for opinions. Just not the one that the idiots who pass themselves off as editors chose to mount: 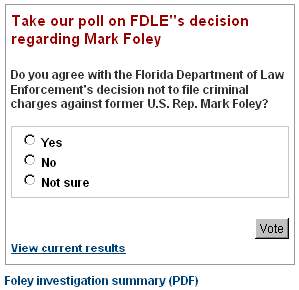 Just so we're clear, the only way this poll makes sense is if you assume that FDLE had enough evidence to prosecute Foley but let him off the hook. That assumption is a direct contradiction of the story that it accompanies.

Instead of asking readers how they felt about Congress' choice to obstruct justice and let a pedophile run free, the Sun-Sentinel chose to insinuate that the FDLE had a choice on whether or not to pursue a case in which they have no evidence to present at trial, even though the Sun-Sentinel just published a story that flat-out states Congress acted to hinder the investigation.
Did the editor who signed off on this idiot poll even read the story it accompanies?

Let's be clear; if FDLE takes this case to court, and it gets to trial, the case will be lost because they don't have the original source of the emails in the chain of custody. Without that key evidence, Foley would be acquitted. And because of double-jeopardy, we'd never be able to re-visit this case. He'd be scott-free. By declining to file charges now, there will be no trial. If a Congress in the not-too-distant-future is overcome with decency and morality and a love of justice, they could choose to make the computer and its evidence available to the FDLE, and Foley could still be brought to justice. If Congress can be made to do the right thing.

But FDLE can't force Congress to do a damned thing. Only public outrage has a hope of doing that, but the Sun-Sentinel has acted instead to direct outrage at the FDLE.
This is worse than a simple omission of fact; the Sun-Sentinel is misleading its readers. They ought to be ashamed.