Mark Sanford: Then and Now 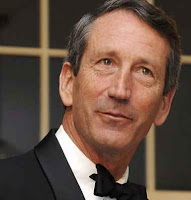 “I think it would be much better for the country and for him personally (to resign). I come from the business side. If you had a chairman or president in the business world facing these allegations, he’d be gone.”
-SC Governor Mark Sanford, speaking in 1998 of Bill Clinton.

Now:
"I've been unfaithful to my wife."
-Mark Sanford today, after his office originally said he was absent from the state while hiking the Appalachian Trail.

So, according to Mark Sanford, the only option he has is to resign.


Understand that this isn't my opinion: I don't care who a person sleeps with as long as they're doing their job. His wife is the injured party here, not the electorate. But Sanford passed a judgment on another, and so it's only fitting that he face that same judgment. It's his own standards (or the standards he claims to adhere to) that he's crossed.

Have the courage of your convictions, Mark.
(h/t to Dusty)