I hate writing about certain people. I feel that I'm falling into their trap by dignifying their drivel by The mentioning their names. 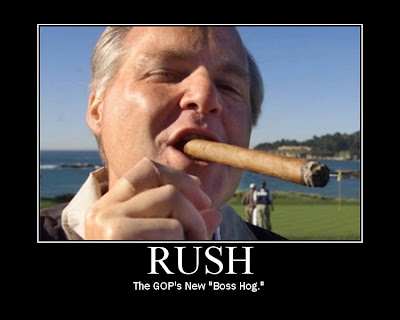 And that's why I will be using an anagram to discuss America's Addict, a man I shall henceforth refer to as "Shah Limb Guru." If you really want to know his real name, feel free to run it through an anagram server.

Now, I don't why anyone thinks that this junkie ever says anything worth listening to.

When Prince Georgie W was president, I knew he was going to fail, but I hoped I was wrong, and I said so.

But not the GOP's top drug abuser; he's stated on the record that he hopes that our President fails us.

When he's not spewing hate while accusing those who notice he's spewing hate of being haters themselves, this celebrity druggie swings from getting the facts wrong to simply lying outright.

Chez at Deus Ex Malcontent illustrates the manner in which the GOP's Junkie parades his ignorance on a daily an hourly basis:

"We believe that the preamble to the Constitution contains an inarguable truth that we are all endowed by our creator with certain inalienable rights, among them life. Liberty, Freedom. And the pursuit of happiness."

I'm sure you do, pookie, but that doesn't make it true. The preamble to the Constitution actually goes like this:

We the people of the United States, in order to form a more perfect union, establish justice, insure domestic tranquility, provide for the common defense, promote the general welfare, and secure the blessings of liberty to ourselves and our posterity, do ordain and establish this Constitution for the United States of America.

The sad part is that he stated this during a speech in which Shah Limb Guru was accusing President Barack Obama of "bastardizing" the Constitution. Like Shah Limb Guru would even know, given that he doesn't know how the preamble goes.

Why anybody pays any attention to this clueless blowhard is beyond me.

Email ThisBlogThis!Share to TwitterShare to FacebookShare to Pinterest
Labels: right-wingnut