FPL: Mere Profits are not Enough 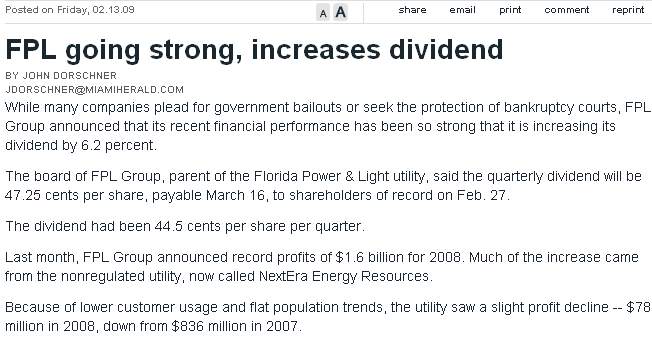 FPL is making money. That's fine. I have no problem with that. The point of being in business is to make money. Business is supposed to be profitable.

But then there's this: 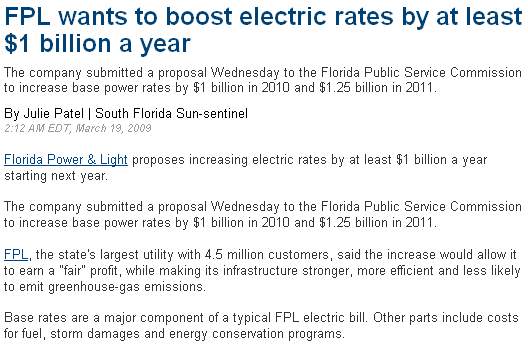 Let me make sure you understand this: FPL is making a very health profit NOW. Their expansions and improvements are already budgeted - and most of those projects are underway now - and they made record profits last year. In fact, they made 1.6 billion last year. This increase will result in profits well over 2 billion, assuming effects from the economy will reduce their record earnings.

What I want to know is: what is the difference between profits, and fair profits?

Right now, you and I and every taxpayer in America is being asked to pony up 700 billion dollars (on top of the 175 billion we wasted on AIG) to shore up banks and investment firms. GM and Chrysler are on the verge of gong belly up. Regional newspapers are laying off staff and many have already shut down, with others expected to follow in the next year. Workers are losing their jobs, so they are walking away from mortgages because they simply can't pay them even token sum, and FPL wants us to pay 30% more, not because they are struggling, but because they want to line their pockets.

Remember Katrina and Wilma? Many of us were without power for weeks; we lost wages from days we weren't working because our business sat in the dark. FPL had to replace hundreds of thousands of miles of cable, and had to make millions in repairs. And guess what? They still posted a profit! How? By pointing out to the PSC that because they couldn't bill customers for service they didn't provide, they stood to lose money. So the State of Florida paid them for the service we didn't receive, because god forbid a company should have lowered profits following a disaster.

I have only three words to say to FPL, and the PSC clowns better start practicing them right now, because if they don't use them, I say we should storm their offices and tar and feather the lot of 'em.

Here are the three words:

GO
TO
HELL
Repeat as necessary.