She uses words. And words have definitions. Definitions are, by definition, definitive; that is they define the meaning at its absolute value. Even when you mis-use the words, they have meanings that can be derived with a little patient study. 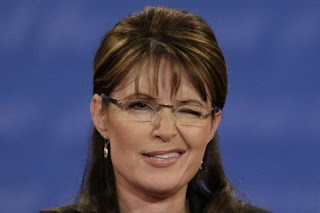 For example, the McCain/Palin campaign (or, as Sarah likes to call it, the Palin/McCain campaign) has been using a phrase that on the surface makes no sense, if you take the words they are using at their face value.

Palin has said it several times; it caught my ear during her debate. Amidst all the nonsense she was gibbering, she blurted out this line:

"...I've joined this team that is a team of mavericks..."
- see transcript via CNN

If you recall, I discussed the word "maverick" last month. And since I don't think they are claiming to be a team of lost calves, they are using this definition of maverick:

MAVERICK: an independent individual who does not go along with a group or party

Now, since a maverick is an individual who does not go along with a group, it is not possible to have a team of mavericks.

Unless, of course, you are talking about a racing team comprised of the compact Ford of the 1970s.

But since we're talking about the Presidential race, and not a stock-car race, I think it's clear that neither McCain nor Palin are claiming to be a Pinto's brawnier cousin.
They may feel free to correct me on this.

It's clear that they can not have a team of mavericks, because that is a term that negates itself, since maverick means someone who acts alone. What they have is a group that doesn't follow the rules.

Oh, wait, there's a word that fits this! This must be what they really mean!

GANG: a group of persons working to unlawful or antisocial ends

And what do you call a member of a gang?

GANGSTER: a member of a gang of criminals

See? If you spend a little time with a dictionary, you too can learn what people are really trying to tell you!