Respected journalist Michael Putney has withdrawn from an upcoming debate because he discovered the participants would receive the questions in advance. And while the Chamber hasn't referred to the luncheon as a debate, they are implying as strongly as they are denying that's what it is.

How are they implying it? By having a moderator, and by collecting questions from the public for the forum members to answer; that implies a give-and-take discussion. Those are things you find in a debate. The moderator asks questions of the participants, and they do their best to answer those questions.

The sleazy weasels respected members of the Chamber are trying to eel their way out of it by claiming "The forum format is not a debate."

Let's turn to the dictionary, shall we?
Forum: 1. a public meeting or lecture involving audience discussion

Debate: a regulated discussion of a proposition between two matched sides, the formal discussion of a motion before a deliberative body according to the rules of parliamentary procedure

As you can plainly see, "debate" is much closer to what the Chamber claims it is trying to do. In a debate, issues to be discussed are decided in advance, which fits with collecting the questions. If the Chamber was honestly

In neither case do you give a cheat sheet to the participants.

What the chamber is actually presenting is a scripted event: it's a play. There is no "moderator," and there are no "questions;" there is an actor who reads his lines. The other players already know what the moderator is going to say, because they have a copy of the script. They've had days to prepare, to learn their lines.

There will be no glimpses into the beliefs or abilities of the candidates, because this event is essentially one of their paid commercials. The only difference between this and their commercial is that the suckers viewers are being charged to watch it.

Michael Putney was justifiable outraged when he found out that he was being brought in not as a moderator, but a ventriloquist's dummy.


"That reduces the moderator to some kind of puppet and if that's what they wanted, they can hire an actor.'' 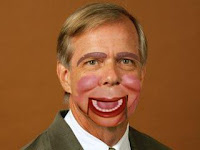 He stepped down from the event. But not to worry, they found a replacement: WTVJ's Nick Bogert apparently doesn't mind being a mindless puppet shilling for dime.


Hey, didn't Mike Wallace pitch cars back in the 50's?
I guess that tells us everything we need to know about the Chamber; they're stuck in the 1950s, while the rest of us are in the 21st century.