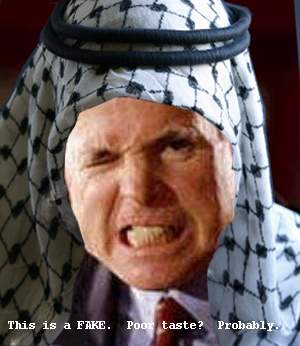 John McCain may be losing support from his fellow Republicans, but that's OK, terrorists are stepping up to fill the gap.

According to Fox News:
Al Qaeda-Linked Web SiteBacks McCain for President
"If Al Qaeda carries out a big operation against American interests," the message said, "this act will be support of McCain because it will push the Americans deliberately to vote for McCain so that he takes revenge for them against Al Qaeda. Al Qaeda will succeed in exhausting America till its last year in it."


For those of you who keep track of these things: