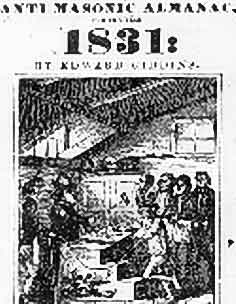 Here's an odd factoid: the Anti-Masonic Party started our tradition of holding a convention to choose the party's candidate for President back in 1831.  Samuel Hudson Fisher I, my great-great-great grandfather, was a founding member, and was one of the delegates from Pennsylvania at that convention.

The party itself was a single-issue organization; a reaction against the suspicious death of William Morgan, of Batavia, New York.  He was supposedly murdered by the  freemasons because he threatened to expose their secret rites.  It's "supposedly," because his body was never found.

But the man had indeed written an exposé, and he did vanish in 1826.  And that was enough to start hysteria.  It didn't last more than a few years, and its strongest influence seems to have been to undermine the campaign of Henry Clay.

But their legacy of the national party convention lived on, and for good reason.

The practical telegraph would not be invented for another 6 years, and would take a couple of decades to come into common usage; so it was a time when information took weeks to propagate across the country.  Bringing all the delegates into one place to select the candidate made so much sense that the other major parties followed suit by the next presidential election.

Up through the twentieth century, no one really knew who the candidate would be until the national convention had hashed it out.  Often, candidates were completely unknown outside their own communities, let alone outside their state.  Getting all the party delegates together was really mandatory, in order to bring the number of candidates down to a figure that wouldn't overwhelm the ballot.

But with the advent of the information age, the convention has ceased to be a place where decisions are made and have devolved into a pointless show of affirmation.  The candidacy of Mitt Romney was really determined months ago.  Even John McCain's candidacy was a foregone conclusion.  Even George W. Bush wasn't that much of a longshot.

Instead of statesmanship, it is the most prominent example of how politics in the United States has become a dog-and-pony show.  In the last few Republican National Conventions, it's increasingly apparent that it's no longer an extension of democratic principles, but a time for everyone to toe the line - or get out.  When Maine sent some Ron Paul supporters with the delegation, they were not seated.  And that may be the only surprise decision to come out of it, and it sends a message we should take to heart:  the Republican Party cares so little for the voice of its own constituents, it's unlikely that they will respect those of non-Republicans.