In a discussion about the Republican Party and its tendency to bolsterits positions with whopping lies, the other party confessed that they didn't particularly care for Mitt Romney.  "But anyone but Obama will be a better choice."
This is a flawed argument, one only held by those too lazy to actually think it through.  So let's  examine the folly of voting for "Anyone But."
"Anyone But Alex Sink"
In 2010, Florida elected Republican Rick Scott to governor.  Although implicated in a Medicare fraud that resulted in the largest criminal fine in US history, and even though many of his own party  believed that he may have had a part in that fraud (no charges were filed because his underlings  wouldn't rat him out), he beat out his squeaky clean opponent, Democrat Alex Sink, a banker with a solid record of success in the private sector.
As quoted in the Miami Herald on November 3, 2010:

"I wouldn't have voted for him if I had another Republican to choose from,'' said Frank Paruas, a 38-year-old Kendall Republican. "I think Alex Sink isn't a bad person. But I just couldn't vote for anyone in the Democratic party right now.''

He didn't vote for Rick Scott, per se.  He voted for "anyone but" the other party's candidate.
Florida has paid the price since.  And I mean that literally. 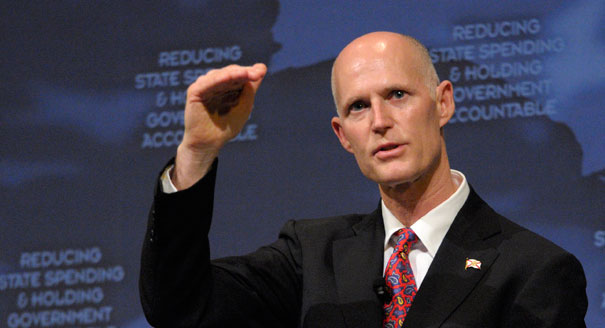 "My egregious blunders only stack this high!"
Right off the bat, he rejected the popular high-speed rail project that was going to begin with a stretch from Tampa to Orlando as the first link.  It would have been paid for with  $2.4 billion in Federal stimulus funding with matching funds from the private sector, and would have resulted in thousands of jobs, with no Florida tax dollars coming out of the state budget.  And since it was only the first stretch of a rail from Miami to Tallahassee, we'd have continued to have return on the investment for decades to come.
To add injury to insult, just a few months later, he approved a 61 mile commuter rail project at a cost of $500 million to state taxpayers.  He slashed other budgets to fund this one train line that would only serve its 61 mile  stretch.
So that's $2.9 billion before the end of his first year.  But there's so much more.
He signed off on a law imposing mandatory drug testing on welfare applicants, even though studies shows that less than two percent of applicants use drugs.  And in fact, the program produced no savings, instead adding another $45,780 to cover the cost of reimbursing the 98% of applicants who passed the test.  And in fact, similar laws had already been struck down.  And so to, was this one.
At least one lawsuit is still pending, so we don't know how much this turkey will end up costing Florida.  To add insult to injury, he tried to pass a similar law for state workers, which courts quickly swatted down.
Rick Scott has also signed off on legislation that violates the Constitution of the United States.  The most recent example is the voters purge; while the idea isn't a bad one, Florida is required to submit any changes to voter eligibility to the courts, due to the state's egregious civil rights violations in the past.  They didn't.
Scott is now squandering tax dollars to fight a battle he's already  lost.  Is the purge necessary?  Apparently not; so far, less than one percent of the voters in question have turned out to be ineligible.  Earlier in the year, a judge declared an earlier attack on voters' rights to be unconstitutional.
Scott also approved a law that penalizes any firm that does business with Cuba, a clear violation of Article 1, section 8 of the Constitution, which states unequivocally that only Congress has the right to regulate commerce with foreign nations. More tax dollars wasted to fight for a bad law he should have
vetoed.
That's somewhere in the neighborhood of $3.5 billion dollars wasted because voters chose "anyone  but" the other candidate.
But we mustn't forget his "other" accomplishments.
By the end of his first year, polls showed that voters would then elect Democrat Alex Sink by a wide margin if given an opportunity to do so.  In a more recent Republican Party poll, Scott lost out to an obscure state representative who, ironically, was selected because he was "anyone but Rick Scott."

Email ThisBlogThis!Share to TwitterShare to FacebookShare to Pinterest
Labels: election, hell in a handbasket, I Blame Frank, politics, republicans, right-wingnut