The Miami Herald reports that the Florida Legislature has decided to violate the spirit and the letter of the Constitution:

Florida lawmakers passed sweeping but little-noticed legislation this session prohibiting local governments from hiring companies that do business with Cuba.

The law appears to target one of the county’s largest contractors: Odebrecht USA, the Coral Gables-based subsidiary of the giant Brazilian conglomerate. The parent company’s Cuban affiliate is participating in a major expansion at the Port of Mariel.

Miami-Dade legislators, with near-unanimous support of the Florida House of Representatives and Senate, pushed the bill as a way to keep taxpayer dollars out of the hands of repressive regimes. 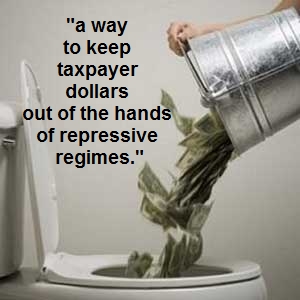 This also keeps taxpayer money out of the hands of repressive regimes.
And it's cheaper, because there's no lawsuit.

Of course, since it will cost millions to defend this stupid law from the inevitable lawsuit, it will also serve to keep taxpayer dollars out of the hands of our schools, law enforcement agencies, courts, and other crucial agencies.  It's simply a huge waste of time and resources.
You see, the law is unconstitutional.  Don't believe me?
Article 1 Section 8 of the Constitution:


Some of the drooling idiots who perpetrated this Constitutional breach seem blithely unaware of it:

Except, of course, that it won't. States do not have the right to regulate trade.  Only Congress has that power.
This isn't the first time a state tried to pull a bone-headed maneuver like this.

“It’s unconstitutional,” he said, citing a 2000 Trade Council case in which the U.S. Supreme Court struck down a Massachusetts law restricting state businesses from dealing with companies with ties to Myanmar, formerly known as Burma.

Yes, it's true: this legislature has wasted our time and tax dollars to enact legislation that has already been judged and thrown out by the Supreme Court.

In a unanimous decision, the court struck down a Massachusetts law that forbade the state government to purchase products from companies doing business with Myanmar, or Burma. It said the law usurped the foreign policy-making powers of the federal government.

"The state act is at odds with the president's intended authority to speak for the United States among the world's nations in developing a comprehensive, multilateral strategy to bring democracy to and improve human rights practices and the quality of life in Burma," Justice David H. Souter wrote for the court.

We can only hope that Governor Scott will veto this steaming turd of a law.  But it's a slim hope; the governor supported drug testing, which the Supreme Court has also ruled against.

Email ThisBlogThis!Share to TwitterShare to FacebookShare to Pinterest
Labels: abuse of power, hell in a handbasket, politics, republicans, right-wingnut