The Huffington Post reports that New Hampshire  State House Representative has Jeanine Notter authored a bill that would force doctors to lie to their patients.

The Republican politician and Tea Party enthusiast introduced House Bill 1659, "AN ACT relative to the women’s right to know act regarding abortion information."  It's another one of those laws loved by conservatives and religious fundamentalists; its intent is to coerce a woman out of getting an abortion. Or, as the religious right likes to describe it, "establishing a woman's right to know."

Usually, this is done by shaming the women who have done all their soul-searching long before they decide that abortion is their best option, but Rep. Notter has a new approach: lying.

Section 132-B:5, part II (e) mandates that doctors must provide women seeking an abortion with:


"Materials that inform the pregnant woman that there is evidence of a direct link between abortion and breast cancer."

According to the American Cancer Society:


Several studies show that induced abortions do not increase the risk of breast cancer. Also, there is no evidence to show a direct link between miscarriages and breast cancer.

Apparently, so many people have been asking them about this, that they published a special fact sheet dealing with this issue specifically; Is Abortion Linked to Breast Cancer?


Abortion and breast cancer are both topics that can bring out strong feelings in people. The issue of abortion is often linked to personal and political viewpoints – even without a possible disease connection. Breast cancer is the most common cancer in women. It can be a deadly disease, and one that many women fear.

Linking these 2 topics creates a great deal of emotion and debate. But scientific research studies have not found a cause-and-effect relationship between abortion and breast cancer.

I don't know about you, but I think The American Cancer Society is pretty credible when it comes to cancer facts.  It's what they do; they educate us so we have the information we need to prevent getting cancer, or to effectively fight cancer if we have it.

The Mayo Clinic doesn't address the issue, but it does not include "abortion" on its list of risk factors for breast cancer.  Again, if, as Notter's noxious bill claimed, "such medical data exists,"  wouldn't one of the premiere medical clinics on the planet include that data if it did?


Ms. Notter is simply lying, and is attempting to create a law to force doctors and medical centers to spread the lie.  And worse, she would penalize medical professionals who refuse to support the lie.  Doing so would be classified as a Class B Misdemeanor, and the penalties include suspending and even revoking medical licenses.

When you have to lie to make your case, your case isn't worth making.  But when you not only force others to lie, and then punish them if they refuse to lie, you pervert our entire system of government. 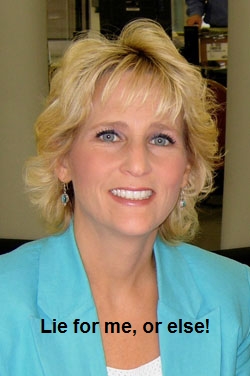 The bottom line is that Representative Jeanine Notter is abusing her position as an elected official to pursue a personal agenda by forcing medical professionals to lie to their patients about possible outcomes of a medical procedure.  Not only should the state of New Hampshire not pass this law, they should censure her for her despicable and callous disregard for the rights of the people she is sworn to serve.

Email ThisBlogThis!Share to TwitterShare to FacebookShare to Pinterest
Labels: abuse of power, corruption, hell in a handbasket, republicans, right-wingnut