Midwest Realty Management: A Stain on our Republic

Dawn Price wanted to honor her husband's service for his country, and show support for all the other men and women serving our country.  So she did what patriotic men and women have been doing in this country for over 200 years; she hung a US flag in her window.  It's not a behemoth, like the Star Spangled Banner, it's just a simple flag, hung inside the glass. 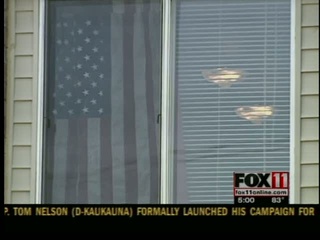 But according to WLUK-TV, the Oshkosh NorthWestern, and numerous other sources, her landlord took issue with this.

Midwest Realty Management, a company with its head so far up its ass that it would make Rand Paul proud, decided that First Amendment rights don't apply, and have served an eviction notice to this patriotic family.

WTMJ spoke with a company representative:

Oschleger insisted that the company’s objections are aesthetic and have
nothing to do with the message a particular flag or banner might depict.

Oh, I see, speech is free only if it is aesthetically pleasing.  So much for all those rulings from the Supreme Court.

"This policy was developed to insure that we are fair to everyone as we have many residents from diverse backgrounds."

Great.  MRM isn't singling out Mrs. Price's civil rights, they're trampling on the rights of every victim tenant they have.

Midwest Realty Management needs to be informed that someone has already found a way to "fair to everyone:"  it's called the First Amendment, part of the Bill of Rights attached to the Constitution of the United States of America.  It states that everyone has the right to make statements.  Statements like hanging a flag or political or religious material in the windows of our homes for all to see.  Our founding fathers thought that this right was so important that they made it the very first right they defined.

Sadly, the fact is that the US Constitution doesn't apply to individuals.  That's right, the Bill of Rights doesn't impose any behavior on you or I; it is a set of rules for the government.  This omission leaves the jackbooted thugs at Midwest Realty Management  free to inflict their own petty tyranny on their tenants. "STFU or move the hell out."  Yes, Randy Rich and his cohorts at MRM are completely within their rights.  But that doesn't make it - or them - right. It's an affront to every American who has ever lived.  It's a slap in the face to every single one of us.

“If you drove by the property you would see four huge American flags flying throughout the complex!  We‘ve got them at the rental office, at the clubhouse, at the Brookside North area, and then another one just down the street!  Four American flags and we‘re unpatriotic?”

The problem, Rodney, is that you're reserving that right for yourself, and denying it to others.  That's not fair.  And that certainly is not patriotic.  That's why Freedom to Display the American Flag Act was passed, specifically banning real estate management organizations from doing precisely what you're doing.  It's too bad Congress didn't think to choose the word "residents" instead of "homeowners."  It's an oversight that needs to be addressed.

If, like me, you're a thousand miles away, write or call to let them know what you think of a policy that runs counter to the high ideals we expect of all Americans.
Midwest Realty Management
2990 Universal Street Suite A
Oshkosh, WI 54904
fax (920) 426-2065
email: heidi@midwestrents.com

Email ThisBlogThis!Share to TwitterShare to FacebookShare to Pinterest
Labels: 1st Amendment, abuse of power, hell in a handbasket