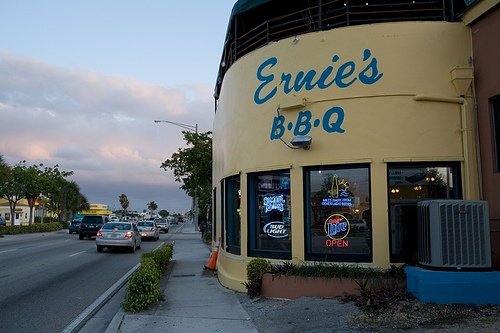 I usually head for the counter at The Floridian for a leisurely Sunday breakfast over the Sunday paper, but this week my timing was off, and the counter was full of people.  And not just full of people, but full of people reading menus.  Not really a situation where you just wait for someone to finish and pay.

With a line of people waiting for tables,  I got in my car, planning to drive over to Lester's - and not enthusiastically.  Lester's is great for breakfast, but always packed.  And this, being Mother's Day, was likely to be more packed than usual.  So as I came up on 17th Street and US 1, I remembered that Ernie's is owned by the same people that own The Floridian.  And here's the good part - they DO serve breakfast!

So I pulled into the nearly empty lot.

Inside, there were only a few tables seated.  But I decided to stick it out, and took a seat.  A waitress gives me a menu, and brings me a cup of coffee.  So far, so good.

Right off the bat, you see that the menu is much smaller than diner across town, but that's to be expected; after all, the Floridian is a diner, and Ernie's is a BBQ joint. Some of The Floridian's signature omelettes are on the menu, as well as other basic breakfast fare.  But management wisely chose to play to the kitchen's strengths, and you can have BBQ for breakfast.  I ordered the pulled pork barbecue omelet, with home fries.

The coffee was better than The Floridian's.  It was a little bit stronger and more flavorful.  Perhaps, as a BBQ joint, they don't serve as much coffee so the machine is cleaner.  Whatever, it was a pretty good cuppa.

At the next table, the waitress was explaining to the couple that Ernie's had been serving breakfast for some time, but it hasn't really taken off.  "We had a banner, for awhile," she said, "but it blew away, and we went through a lot of turnover i the kitchen, so it was inconsistent, so no one wanted to push it, I guess."  But then she added "but now we've got this really good cook back there, and things have really improved!"

The homefries were a hundred times better than The Floridian's, and maybe 10 times better than Lester's.  They were firm, moist without being mushy, and perfectly browned on a couple of facets, just like ma used to make.  My only complaint would be that the portions are smaller than the diners' portions, but hey, we don't really need that many carbs on the plate.

The omelet came with a small bowl of Ernie's BBQ sauce on the side, so I could season it to taste.  It was savory, with small chunks of onion and tomato, and a hint of pepper that reminded me a little of the conch chowder they are known for.  But it's a big honkin' serving, and I just couldn't finish the whole thing, although I really wanted to.

I did not think to ask if the rooftop patio was open for breakfast service.

Like The Floridian, Ernie's BBQ is part of what I like to call "Travis McGee's Fort Lauderdale."  Founded in 1957, Travis McGee - or at least author John D. McDonald - might well have stopped in for dinner at some point.  I'll have to re-read the books to see if a BBQ joint crops up at some point.

Ernie's opens for breakfast at 7am, 7 days a week.