My grandmother turned 90 today. She's still as sharp as ever. 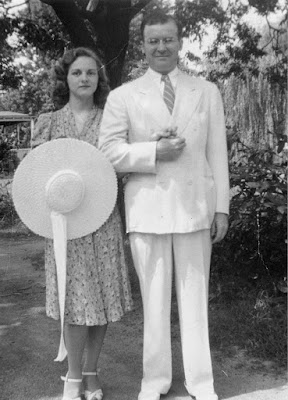 My grandparents met when my granddad was asked to direct a play by a friend of his who ran a community theater group.

"I'll do it," he said, "as long as you get me a knockout blonde for the lead." Enter my grandma.

My grandmother had been onstage since age four, when my great-grandad, Nilly-Willy Tibbitt, decided to create a children's act with my grandmother, and her older brother, Winfield. They'd already been doing their daddy's act for play for years. So they entered Vaudeville as "Winnie and Ginny, The Tibbitt Twins!"

So she was a seasoned actor when she met my grandfather at age 20.

After my mother was born, the family moved into a house in Mullica Hill, NJ. After a few incidences, my grandmother realized that the house was haunted, and that launched a lifetime of examining the periphery of the known universe.

She investigated dozens of hauntings in South Jersey, aided by my grandfather's knowledge of local history. She documented the evidence, eliminated possibilities, and kept careful records. This resulted in a lecture that she gave throughout South Jersey and the Delaware Valley for decades.

She studied the paranormal, corresponding with reknowned psychic Arthur Ford for years. She opened her home to strangers and refugees: she learned yoga from a swami who traveled the US on a pilgrimage in the 1950's; he stayed in my grandparent's home for several weeks, giving yoga instruction on their broad porch. She opened her home to Jordanian painter Nabeela George, who gifted the family with one of her paintings.

And in a what might be weird coincidence, they took in a Cuban couple, a doctor and his wife, who fled Castro's revolution. The doctor's wife gave birth to a daughter at the local hospital just a few months before I was born. What's weird about that? I was working on a tour and met local actor Elena Garcia. We became good friends on the tour, and over the course of it I learned about her background: her father was a doctor, and her parents were taken in by a Quaker family in New Jersey. Elena was born in Camden, NJ, in the same hospital as most of my family. (I was born in Dayton Beach; dad was down here working on the space project).

My grandmother fostered my interest in reading, and early on stopped giving me children's books in favor of more mature fare. Once it was a book on quantum physics, but it was always something interesting, and something that fit me.

A few years ago, a mutual friend called looking for my grandmother; he was directing a play he had seen her in years before, and wanted to know if she was still around. "Well, she's in Iowa," I said, "but she's always asking me to find her a good role in a play."

She stayed with me while she performed GOING TO SEE THE ELEPHANT, reprising her role as Granny. Of course I saw the show, and we went out with the cast afterwods. She had them all enthralled; she was telling the youngest cast member, a girl of nineteen, about yoga and the value of stretching.

She still performs: she did a "Senior's Follies" thing in Iowa City a couple of years ago. Just today she was telling me about a recurring gig: at the local medical college, she portrays an old woman in the early stages of Altzheimers; the students have to correctly diagnose her ailment based on an interview. She's quite popular with the staff.

She's also part of a continuing study on aging: once a month she goes in, and they measure her reflexes, stamina, and so on.

She's still doing very well: last year, we through her a surprise birthday party. My aunt had thought about waiting until this year, but then decided "why wait?'" It was a great party.

And here's my beer-swillin' grandma, toasting her self: