Deja Vu - The Label is BIGGER

The first time I saw the news, I laughed out load.  I had to laugh, because while some misguided idjits think that they are making the world a better place, all they are really doing is fulfilling the words of comedian Denis Leary.


There's a guy... He wants to make the warnings on the packs bigger. Yeah! He wants the whole front of the pack to be the warning.

And here we are, the FDA has ruled that the warning must be bigger. 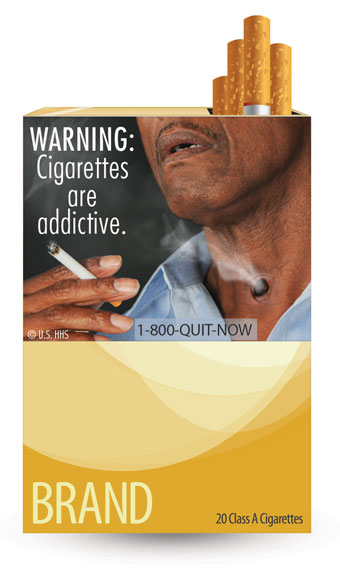 He sums up the issue in his show NO CURE FOR CANCER:


Yes, Congress has caved into the madness, mandating the most intrusive and potentially ineffective labeling law in world history. And frankly, it's highly likely to be overturned if it gets to court; after all, alcohol is similarly devastating, and no one has proposed slapping a diseased liver on cans of Budweiser.

And get this - scientific studies bear out Leary's claims that the labels won't stop people from smoking!  The Discover Magazine blog 80 Beats  discusses the matter.


In a 2006 study, smokers looked at cigarette warning labels from various countries as they lay in an MRI scanner, which measures blood flow in the brain. Brain regions associated with fear and alarm stayed relatively quiet. But the  nucleus accumbens—an area associated with cravings, and a key player in the body’s reward system—showed lots of activation. These warning labels weren’t scaring smokers, the results suggest; the images were, strangely enough, making them crave a cigarette.

Behavioral psychologist Carol Tavris summed up the field this way, to Sara Reardon at ScienceInsider: “Social psychologists have decades of research showing that fear communications generally backfire, that people tune them out, and therefore that these tactics are generally not effective.”

Anyone born in the last fifty years is fully aware of the effects of cigarette smoking.  We get it.  We've seen the movies, we've followed the lawsuits, we've seen John Wayne lurching around with half his breathing capacity, we've seen Larry King on his fourth heart transplant.  "Cigarettes, whisky and while women will drive you insane." Smoking baaad.  We get it.

But the bottom line is this.


It doesn't matter how big the warnings on the cigarettes are; you could
have a black pack, with a skull and crossbones on the front, called
TUMORS, and smokers would be around the block going, "I can't wait to
get my hands on these fucking things! I bet ya get a tumor as soon as
you light up!"

- Denis Leary, NO CURE FOR CANCER.

So now the question is, if this is who we are, when do we start slapping pictures of morbidly obese people on McDonald's Happy Meals?  How about sticking a photo of a mangled corpse on the side of our cars?

If the Congress honestly believes that these labels are a responsible and necessary approach to keeping Americans safe and healthy, then they are negligent in their duty if they don't mandate similar labels for other potentially dangerous products.

And if they feel that that is going too far, why the exception for tobacco?

Email ThisBlogThis!Share to TwitterShare to FacebookShare to Pinterest
Labels: hell in a handbasket