This is how I spent my forty-fifth birthday. 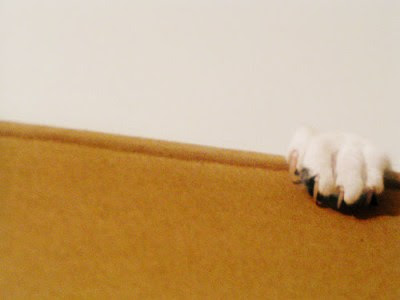 The "incident" actually started the day before my birthday; I was petting the neighbor's cat, something I've done a dozen times or so. He would purr like a garbage disposal, basking in the attention for awhile. Then he'd either leap up and run away, or he'd nip at me, without actually touching me.

You can see this coming, can't you?

This time, he bit me. A good solid, penetrating, chomp. I yelled and flung him off me, and he turned and looked at me like

I went in; not too bad: one little puncture that was bleeding pretty well, and some bruising. I washed it off real good, and irrigated it with hydrogen peroxide. And then I more or less didn't pay any more attention to it. Last time I would pet that ingrateful cat, I muttered, and went on with my day.

The next morning - it's my birthday! I made coffee, and then my mother called to wish me a happy, we chatted. Plans? Breakfast, then Christmas shopping! Maybe I'd hook up with some friends for dinner, later.

After breakfast, I stepped into the shower, and then I saw my wrist: an angry red welt under the bite, and red streaks running up my arm.

I'd taken advanced First Aid; I knew that red streaks up the arm are very, very, bad!

I checked my insurance; the urgent care center around the corner is on the plan. They are also closed. I look at the red streaks. Emergency room. I got dressed, grabbed a book, and headed to the ER. (Why the book? Have you never been to the ER?)

Broward General isn't far, maybe a half-mile. I was getting just the beginning of a chill. Or was that psychomatic? I found a parking spot, walked in, filled out a form, and sat down. My name was called. I hadn't been there ten minutes.

The triage nurse clucked when she saw my arm. She called over a doctor.

The nurse smiled at me. "You're in. He's the chief. Have a seat, and we'll call you shortly!"

They take me in about fifteen minutes later, and I'm shivering in the early stages of septicemia.

A young doctor came into to look at the wound. He asked for my history, I gave it. He looked at me and said "You do realize that we will have to admit you to treat this, right?" I confessed that by this time, I was not surprised. "OK, then."

They gave me a robe, they drew some blood. I gave a history again. Dr. Lam came in to look. I gave the history again, she looked very stern. She felt the swollen area. "Can you feel that?" I nodded. "But I can feel the swelling when I move my hand," I replied.

"Hmmm," she pondered me. "We might need a surgical consult."

It was at this point I began to think either I was in much worse shape than I thought, or Dr. Lam liked to scare people. Well, tough. I was too sick to become scared. Chatter chatter chatter went my teeth, as I stared back at her, "OK."

"If the bacteria has colonized the tendons, surgical reconstruction is called for," she informed me.

"Yeah, that would suck," I replied through my chattering teeth. She shot me a disapproving look, and left the room. I guess I wasn't following the script.

Awhile later, an x-ray technician came in, and took me away to xray my infected arm.

As he put me back in the exam room bed, shivering, he said "Let me go get you a blanket!"

About an hour later (might have been less, but it was all shivers and chattering teeth by then), she came back.

"WHEN were you bitten? This morning?"

"No," I explained patiently, "YESTERDAY morning. I didn't notice how bad it was until THIS morning."

"Sit up, I need to listen to your lungs!"

I sat up, took a shivering breath. Then another. And one more. And again.

"OK, lie back down. We're preparing a room for you now. Someone will come for you in a bit."

I nodded my thanks.

About 20 minutes later, two technicians rolled an xray machine. "We need to shoot a film of your chest."

"You do?" I asked. They confirmed my name. They did. And then they did.

I was wheeled upstairs by 5pm, and hooked up to the first of many, many IV drips.

Dr L's assistant, Dr. Ruiz came up for an assessment. She told me the course of treatment, and said she was sending up an

Dr. S came up about a half hour later. He examined the wound, asked some pointed questions about the cat, and told me that

this was all pretty normal for a cat bite. They were giving me a broad spectrum anti-biotic until my blood results came back. If things went well, they might be able to release me the next day.

Dr. R checked in, I was still feverish. She asked about the hand specialist, and I replied that I hadn't seen them yet. Dr. S came in; the progress on the arm seemed to please him. "Good thing you came in when you did: it could have been very bad!"

He wanted to run some more tests, and by the way, they were keeping me until tomorrow at least.

"10:30? That might be a little tight. You should get a later flight." He looked very doubtful.

My fever broke. My headache stayed. After dinner, I had chills again, and my head was throbbing. Slight fever again. Argh. I managed to change the times on my flight. I can't sleep: I'm worried about getting out. I pulled the IV out, so it had to be replaced. More darcvocet. Head pounds, thud thud thud.

And somewhere about then, it occurred to me that I've had this headache before. When I went most of a weekend without coffee.

But I'd HAD coffee. It wasn't very good coffee. On the other hand, what evidence did I have that it was regular coffee?

My cat-scratch fever-ridden throbbing brain finally forged a coherent theory:
People who are trying to avoid stimulants will suffer more harm from getting caffeine in their coffee than withholding caffeine from people who are on no such restriction, therefore, it's safer to simply serve decaf to everyone than to send out both kinds of coffee to patients.

So the headache had nothing to do with my raging infection.

When the morning shift nurse came in, I asked about getting REAL coffee, and explained my theory.

"Oh! Well, we just made a fresh pot of the real thing out at the nurses' station, I'll bring you a cup!" And she did.

And just like that, the headache was gone. I could think clearly again. Fever gone.