Speak for Yourself, 'Nos Populus'

A conservative relative who shall remain nameless sent me a link to this video:

This is without a doubt the best video that has come out and apparently 6 Million others think so too because there have been 6 million hits in 4 days.

Ahh, yes, a lot of people looked at it, therefore, they must support it and adore it.  Of course, Castro stormed Cuba with less than a hundred men, and had the entire country behind him within a week, and you might have heard something about how that turned out. But I digress.

So of course, I have to dissect this little propaganda video created by the great scholar, Nos Populus.

I'll use screen caps, so you don't have to run the video while reading this.

Cue overtly patriotic music, and zoom in over the Constitution of the United States.  Scroll text!

The problem with this is that Nos Populus don't speak for all people; and come election day, we'll see if they even speak for most people. If they didn't want to lie, they should have stated "We, SOME people..."  Because based on this video, he sure as shit doesn't speak for me.

My relative scoffed back at me; "Well, the Constitution reads 'we, the people.'"  And yes, the Constitution does in fact start with the phrase "WE, The People..."  But the people who wrote the Constitution were duly elected representatives of The People. They were given the right to speak on our behalf.  Nos Populus is some right-wing conspiracy nut with access to a computer; he or she or they can only speak for his or her or their own self.

But since most every thing else they claim wanders from merely vague to outlandishly false, I guess we can't be too surprised. 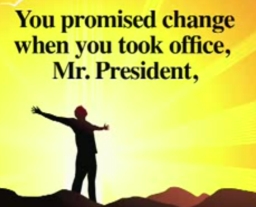 Isn't this from the cover of Dianetics?  I'm sure it's off some religious tract.  But at least we're starting from a point we recognize; hope and change. 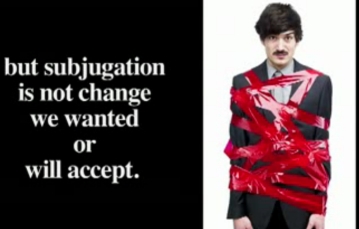 Subjugation?  Who the hell is being subjugated?  I mean, besides this vaguely fake looking guy in the photo. Are they talking about those (current) Iranian hostages?  The Cuban people?  Chinese academics?  They never say.  But we'll stipulate that no one likes subjugation.  Well, except for those crazy whips and chain people fetishists.  They actually like it to a degree that I'm personally uncomfortable with, but to each his-or-her own. 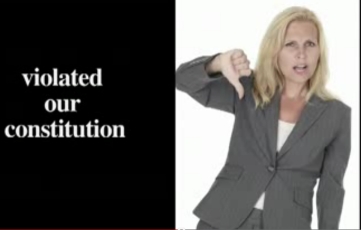 He "violated the Constitution." How did he do that, exactly?  This pale Ann Coulter impersonator giving us a "thumbs-down" isn't a terribly compelling argument.  In fact, it's not an argument at all.  It's just a claim without any foundation.

After all, it's not like he's trying to get prayer into our taxpayer funded public classrooms, which is a clear violation of the Constitution.

My relative stomped and snorted that there so many examples of egregious violations "I don't know how he hasn't been impeached."

My relative has a point; Clinton was impeached, and he didn't even violate the Constitution once.  He did, however, violate his wedding vows.  Which also isn't impeachable.

And here's Obama, who has committed "so many egregious violations of the Constitution" that my relative could not list even a single one, and no one has tried to impeach him.

Perhaps they should play louder patriotic music, dress the model in Revolutionary costume.  That ought to do it.

What do they got next? 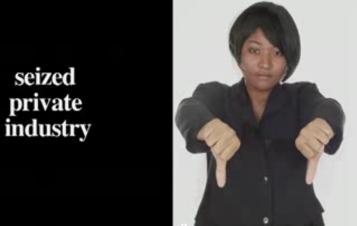 They claim he's "seized private industry" but again, fail to list even a single example of an industry he's seized. You'd think it would be hard to miss this, but I can find no record of it. If he has actually done this, I'd condemn it, but somehow it's never made the news.

I have a friend whose family fled Cuba; her grandparents owned a factory.  Castro seized it, and then put a price on their heads for having the audacity to claim that he was stealing it.  A "dead-or-alive" price, which is just what that sounds like.  Which is why they had to flee, of course.

I find it hard to believe that our government could seize an entire industry and not one news outlet caught wind of it. But you can't argue with the strident voice over patriotic music and a woman with TWO thumbs down.

They also claim Obama's "destroyed jobs" and "perverted our economy" (whatever THAT means). 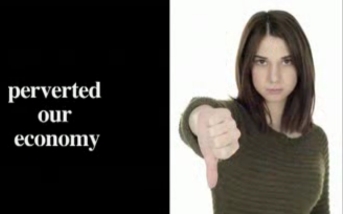 Again, a pretty woman giving us the "thumbs-down" doesn't actually tell us anything about how he's "perverting" anything.  Did he pull a Rocky Horror on our economy?  Did he get it all tramped out in fishnets and high-heels?

And yes, we've lost jobs, and might have lost a lot more if not for some of his actions. But "destroyed?"

Here's a subject near and dear to my heart: 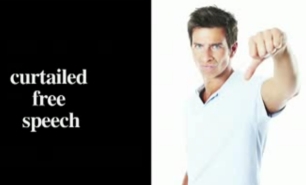 Since Obama has been elected, I have marched three times to support free speech; once against the City of Fort Lauderdale's misguided attempt to make a movie production happy, and twice against a private security company who failed to read directives from Miami-Dade County. No connection to anything Obama has done. Did someone finally arrest Rush Limbaugh?  Glenn Beck?  Howard Stern?

Republican Governor Rick Scott has kicked the shit out of free speech - he booted all the non-Republicans from one bill signing, and spent much of his first year in office avoiding the press - but I haven't seen one example of Obama or his administration "curtailing" free speech.

And the wildly unfounded claims march on; 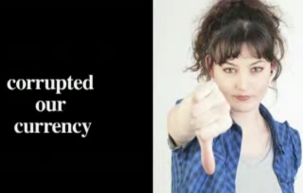 He's "corrupted our currency." Again, I don't even know what that means. Did he get our currency drunk and take its virginity?  Did he get it strung out on Ecstacy and drop it off naked at a frat party? Did he wipe his ass with dollar bills and then buy ice cream with them? 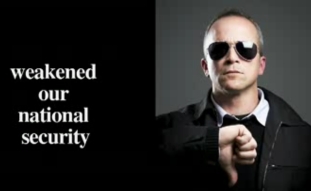 My personal favorite bald-faced lie: "he weakened our security." Let's see if we can figure this one out, shall we?

Did he do it by killing Osama Bin Laden, the biggest threat to our security, perhaps? Bin Laden, of course, is the mastermind behind the 9/11 attacks, who eluded President Bush during his administration.  But Bush bravely vowed he would find the murderer, and searched every golf course in California.

No, wait; that was O.J. Simpson.  Sorry. Honest mistake.

Oh, wait, it's got to be when he helped Libyans overthrow General Mohamar Ghaddafi, the tyrannical dictator who helped terrorists blow up Pan Am 103. Yeah, freeing a country from a fascist dictator who sheltered terrorists certainly made us less safe.

He was also killing his own citizens if they said anything negative about him.  Things like "Our town's well ran dry"  or "You killed my mother for saying the well ran dry."

HEY!, I just realized - THESE must be the jobs Obama's destroyed; "despot," tyrant," "evil dictator" and "terrorist leader."  I have to admit, he certainly destroyed the fuck out of Osama Bin Laden.  And the Taliban has taken a beating, too.

Gotta say, though, I'm just fine with that.  Maybe we can destroy those Somalian pirates, next.

As the music swells, the action is too fast and furious for screen caps to make sense of it.

They claim he's compromised "cultural, legal and economic institutions" which directly results in children not leading our quality of life. Again, do they mention which institutions those are, and how they are compromised? No.  I do have to point out that it wasn't Obama or his party who keeps trying to cut funding to one of our greatest cultural institutions, the National Endowment for the Arts.

"Generational theft?" I've been watching conservatives rail against the EPA, which has reversed the pollution that was choking us.  A couple of Republican candidates have promised to shut the EPA down; if that isn't attempting to steal our future, I don't know what is.

But they are correct about our military. Yes, the brave souls of our armed forces absolutely lay their lives on the line to protect our freedoms. Something Obama has certainly acknowledged in no uncertain terms. And I for one am glad that he's getting them out of the morass of Iran and Afghanistan and bringing most of them home. I have very good friends serving over there.

The most "coercive government" in living memory - and I'll specify the most coercive US Government - has to be the one we had during Senator McCarthy's hearings on Un-American Activities (which, of course, I only know about from historical accounts).  They were so vile that they are now known as the McCarthy Witch Hunt Trials.

McCarthy would force you to testify before Congress.  He'd demand that you describe all the political leanings of your friends.  If you didn't, he'd accuse you of being anti-American, and you'd be blacklisted.  People wouldn't hire you, because maybe you were a Commie.  But even if you weren't, if they hired you, people would think they were Commies, and stop doing business with them.  Better not to hire you.  Or be seen with you.

That's what I call "coercive." What do the makers of this video consider coercive? They don't say.  They simply make the claim over patriotic music, and you're just supposed to accept it.

The sleazy weasels who authored this little musical smear are masters at pulling heart strings; they know full well that no one can dispel vague accusations with the harsh light of reality. While it's clear that they don't have any facts to back up their claims, the fact that they don't supply any facts means that there's nothing solid for anyone to dispute.

Setting their unfounded accusations to patriotic music and compelling images, speaking their gibberish in strident tones may give the illusion that they make a credible case, but in fact, this video makes not a single coherent argument. It's only gibberish. 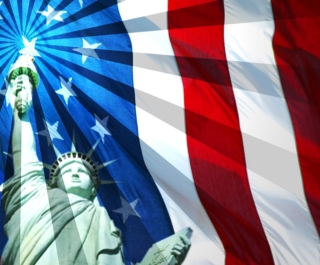 I promise to stand up for liberty, too. And I'll do it by fighting against the sleazy lying scumbags who created this video, and those who swallow its hollow bile as some sort of valid manifesto. Those people are the real threat to our freedom; because they believe any empty lie they are told without question.

Email ThisBlogThis!Share to TwitterShare to FacebookShare to Pinterest
Labels: election, hell in a handbasket, right-wingnut