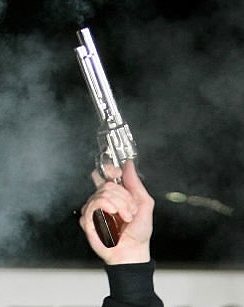 It's been ten years since the world didn't come crashing to a halt because the computer in your car thought it was 1900.  No, the machinery of civilization didn't even shudder, but one thing remains constant; the nimrods in South Florida who forgo fireworks in favor of firearms fired into the sky. Yessiree, nothing says "Happy New Year" like a bullet in the head.

In 2008, celebratory gunshots took the life of 11-year-old Joshua Arroliga. The Opa-locka boy was playing hide-and-seek next to a discarded sofa at his apartment building when one of his neighbors emptied a 9mm Glock's magazine into the furniture -- not realizing Joshua was hiding behind it.  - Miami Herald, 12/31/2009

Just remember, the Right to Bear Arms isn't a license to be stupid.  If you insist on using your firearm to celebrate New Year's - or anything else - make sure it's pointed at something impenetrable, like your own skull.