Up until now, I've pretty much ignored Michelle Malkin. I know who she is, but I don't read her column. I basically consider her to be just-another-right-wing-shill, and thus not worthy of my attention.

Malkin sold her soul pretty early on to become one of the chorus of GOP pundits. Instead of aspiring to great things, she spends her time denigrating anyone who disagrees with the Conservative point of view.

In case you've spent your life perusing REAL journalism and somehow missed the witless wonder of Malkin, she's the one who wrote an entire book defending the internment of American citizens of Japanese descent during WWII. Most people recognize that this was an egregious breech of civil rights, but not Michelle! Eager to suck up to the Republican power structure, she worked diligently to defend one of America's greatest moral lapses in history in order to help the current Administration defend its similar campaign to harass people of Mid-eastern descent in the name of national security.*

Now, Michelle "the Moron" Malkin has found a NEW threat to America. So what's so dangerous about it? Is it because of Rachel Ray? Has Tony Bourdain been right all along.

No, it's not Rachel Ray.

Is it the coffee? Is it because caffeine is really drug?

No, it's not the coffee.

Is it the CHERRY BLOSSOMS? George Washington chopped down a cherry tree - are they the danger?

No, it's not the blossoms of the cherry trees.

Really! In her own words:


So it was with some dismay that I learned last week that Dunkin' Donuts spokeswoman Rachael Ray, the ubiquitous TV hostess, posed for one of the company's ads in what appeared to be a black-and-white keffiyeh.

The keffiyeh, for the clueless, is the traditional scarf of Arab men that has come to symbolize murderous Palestinian jihad.

Or, it could just be a scarf.

She describes it as "hate couture." The woman needs serious psychiatric help.

The real problem with Malkin's misguided rant is that she's lying when she says that Rachel Ray is wearing one. "Kaffiyeh" isn't simply arab for "scarf", and not every scarf is or can be made into a kaffiyeh.

According to Webster's Online Dictionary:


kaf·fi·yeh: an Arab headdress consisting of a square of cloth folded to form a triangle and held on by a cord

The item of clothing worn by Rachel Ray does not match this description at all; it's not folded into a triangle, it's not held on by a cord, and it's not even on her head.

What Rachel Ray is wearing is a simple, good old American SCARF. This is a SCARF 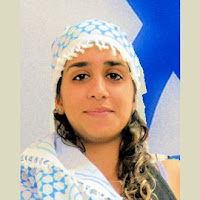 This is a KAFFIYEH.

Oh, about this young lady wearing a kaffiyeh? I found her at www.israelimilitary.com. According to their home page: "Israel Military Products are suppliers to the Israel Defense Forces soldiers."


Malkin: "The scarves are staples at anti-Israel rallies"

Nothing more anti-Israel than one of Israel's own military suppliers, I guess.

Women have been wearing scarves like the one Ray is sporting for decades. It's a fashion accessory. It has nothing to do with Yassir Arafat, and it's certainly not "hate couture."


Here's Bea Arthur, in her old TV show MAUDE, from the 1970s. Maude wore scarves all the time.

Stevie Nicks had a wardrobe that was practically all scarves! It was part of her "gypsy" look.

Another 70's TV icon was Rhoda Morgenstern, from the Mary Tyler Moore Show. She was invariably draped in a scarf of some description.

The Gawker has been following this issue, and found this photo of Senator McCain's daughter Meghan sporting a scarf.

According to Malkin, these images will inspire you to commit acts of violence. It's nonsense, of course. Utter tripe. There is no movement to spread violent revolution using fashion accessories.

Not that there hasn't been clothing designed to honor terrorists; we've all seen the ubiquitous Che Guevara t-shirt. Che was unquestionably a terrorist.

People have been wearing Che Guevera t-shirts for forty years, and not one act of terrorism has been linked to the shirt, or anyone wearing it.

In our entire history, no article of fashion has led to acts of terror or violence. Outside the occasional Yankees fan wearing their teams' logo in Boston, of course.

Michelle Malkin has lied to the American public, and to her readers (for lack of a better word). This isn't about "hate speech," or supporting terrorism, or keeping America safe.

This is about Michelle Malkin getting attention. This is about her using her bully pulpit to manipulate others for her own entertainment. She isn't making the world a better place, or watching out for your best interests; she's just yanking your chains.

And you let her do it.


*Before you go and accuse me of aiding and abetting terrorists, I just want to point out that prior to September 11, 2001, the deadliest act of terrorism on American soil was perpetrated by white Christian men. If we're going to find terrorists, we need a better tool than race. I will also point out that had we funded our own laws regarding passenger lists, the hijackings that led to the acts of terrorism could not have occurred.